Bournda National Park is a 2,600 ha protected area in New South Wales (NSW), Australia, managed as a national park by NSW National Parks and Wildlife Service, and was established on April 24, 1992 It was created from state forest , reserves , Crown & freehold land . Bournda National Park is a place of great beauty and conservation , with saltwater and freshwater lakes, a lagoon, a creek and beaches.It is regarded as one of the most diverse & significant national parks on the eastern seaboard. The native mammals you're most likely to see in the park include:

It is 465 km southwest of Sydney near Tathra. Bournda National Park spans from Kianinny Bay, on the southern side of Tathra, south for about 13 km. There is a good walking track, along the coast for most of its length. 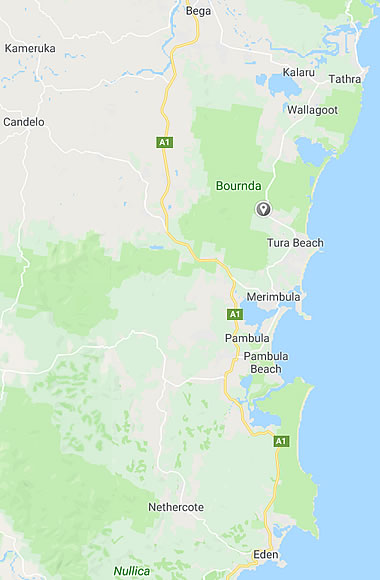 . Tura, Bournda and Wallagoot beaches are popular for swimming, surfing and beach fishing. There is an extensive network of walking tracks  featuring the viewing platform at North Tura. The shallows of Wallagoot Lake offer safe swimming. Sailing , power boating and water skiing are all catered for on the lake and visitors are invited to use the launching ramp at the Wallagoot lake boat club area, for which the club charges a launching fee.

Bournda field studies is operated by the Department of Education, and assists school and community groups conduct field trips to Bournda and adjacent area. Phone: (02) 6492 2019

Is a small coastal town on the Far South Coast or Sapphire Coast of New South Wales, Australia, approximately 3 km north of Merimbula and only 5 km from Bournda Retreat.

Tura Beach has a shopping centre that includes a Woolworths supermarket, BWS ,a great bakery down the road, and pizza shop and bridge club. Tura Beach is a purpose-built community with its coastal golf-course as the centrepiece. The Tura Beach Country Club is the club with 'the million dollar view' set on a coastal hill within natural shrubland. It is home to both men's and ladies' golf clubs, men's and ladies' bowling clubs and the Tura Beach Tennis Club.

There many options for eating out nearby. Some of the locals like Merimbula RSL-ph 6495 1502. You can ask for a window table for 6.00 or 7.30 sitting. Wheelers seafood is a popular restaurant.The best oysters in australia at tathra oysters ph 64941453